The U.S. Intelligence Community has had one toe (OK a few toes) in the social media pool for some time now but this launch really could represent a significant change in the way it communicates with both the people it protects and a global audience. Well, at least the possibility of that change exists. Creating the account was a massive first step. Reaching its full potential is going to require discipline, patience, and some tolerance for risk. 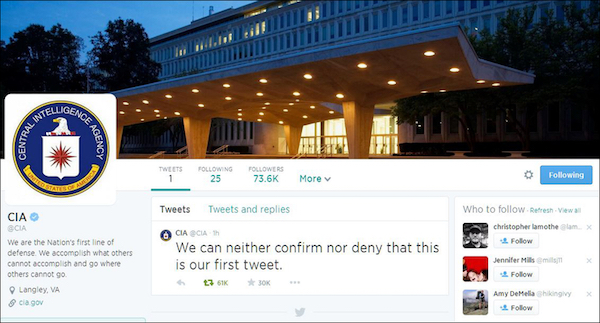 The challenge for the CIA lies in public perception. When people think of American intelligence they think CIA. That’s softened just a bit with Edward Snowden’s theft and release of classified material but the CIA brand and its hold on people’s imaginations cannot be denied. There is an upside to that brand awareness and reputation but the downside is that their Twitter account will be a target for criticism, delusional rantings, and propaganda at a level that other accounts owned by the U.S. intelligence community will not. Paranoid schizophrenics just don’t get worked up over the National Intelligence Council or the National Geospatial-Intelligence Agency. Millions of people do, however, have odd paranoid thoughts about the CIA. I suppose we can thank decades of spy fiction for that.

But those are just the external problems. The folks manning this account have internal threats that are likely more terrifying. One can only imagine the oversight and second-guessing that could, and almost certainly does, exist in that environment. Running any corporate or government social media account is stressful but few come with stakes this high. These are tweets that often have to be carefully constructed, reviewed, considered, re-constructed, re-reviewed, and re-considered before ever seeing the light of day.

That being said there is still room for the CIA to build an engaging, entertaining, and informative feed. It doesn’t have to be endless stream of links to dry press releases on cia.gov. The Spy Museum is an excellent example of tone and content that CIA could adopt when it wants to loosen up a bit. There are very few organizations in the world sitting on content that can match the CIA’s archives. The present is mostly off limits but the agency has occupied a unique place in history. I hope that here they can put that history to good use and deepen the public’s understanding of intelligence and its necessity.