I don’t seek out media appearances but last week was a busy one for me. I was interviewed by CBS News, BBC World Service, Jonathan Green of Australian Broadcasting Corporation’s Sunday Extra, and by Piya Chattopadhyay of the CBC’s The Current. I also had invitations from NPR and CTV that I, unfortunately, had to turn down due to time constraints. It was a busy week but thankfully all of the journalists, hosts and producers who reached out to me had a sincere interest in complex stories. They are my kind of people so talking to them was actually quite fun. 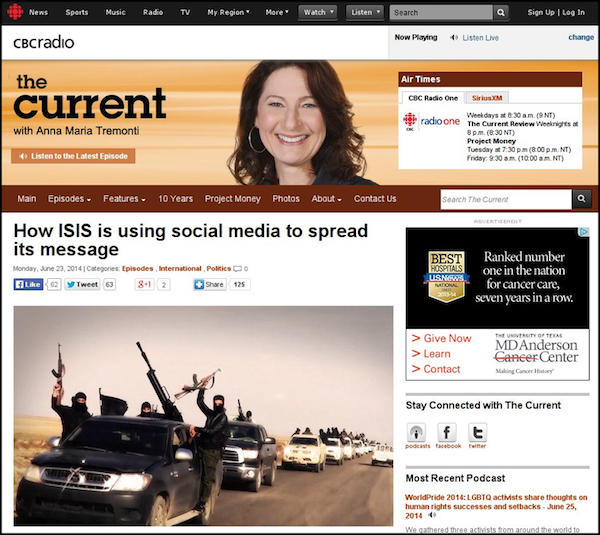 A thirty minute guest slot on a radio show seems like an eternally long time when the invitation is extended. But believe me when I tell you that it passes in an instant. A five minute appearance is even worse. It’s like being shot out of a cannon. I still have no idea what I said during my brief 1 a.m. BBC World Service appearance but I do know that an absolutely terrifying number of people do. So that leaves a few more thoughts on this subject that I didn’t quite get to…

It wasn’t too long ago that the hacker group LulzSec rampaged through the internet. They appeared to be an unstoppable force. They were seemingly above the law. In fact, they openly mocked it day in, day out. Throughout it all their message was magnified by non-stop attention from global media fueled by a massive social media footprint. For months the feds looked absolutely lost and outmatched. In reality, they were making a lot of progress. They quietly and methodically identified the key players, picked the core group apart, then shut them down and locked them up. Along the way they leveraged the intelligence gathered and the informants created to go on a rampage of their own. The feds won and they won big. So when looking at groups like this it’s important to remember that Superpowers don’t tweet their way to lulz. They use intelligence, police work, courts and the occasional missile. And Hellfires are the ultimate last lulz.

ISIS, although far more dangerous and disturbing, has swept into the public consciousness in much the same way as LulzSec. Their spectacular success on the ground has been augmented by a clever, well-orchestrated, social media campaign. More importantly, its members and supporters speak the language of social media, and are able to build campaigns around it, in a way that few other groups have. They get snark. They understand the quirky humor and leverage it to their advantage. They know how to make their message move and how to trigger a response. They even have technical resources to help them do that. All of it would be unremarkable, actually, if not for their mission and the surrealness of unspeakable brutality juxtaposed with the odd kitten and AK-47 pic.

Still, none of this should be surprising. We are now in era where a good portion of the planet has grown up with social media. In the very near future (and in the case of ISIS right now) extremists won’t have to learn how to leverage the tools or the lingo. Everyone of fighting age will be a digital native with life in social media that likely pre-dates their radicalization. All of this social media campaigning (which still strikes some as sophisticated) will be second nature to them. And again, in the case of ISIS, it is obviously second nature to many of its supporters right now.

A rapid stream of ISIS victories, massive amounts of media coverage and millions of breathless tweets have had a powerful combined effect on the group’s image. Like LulzSec at it’s height they appear to be unstoppable. And while they are a massively destabilizing force in the region, the general public (and many journalists) should start taking a much more critical view of their propaganda. This five year projection would be a good place to start. 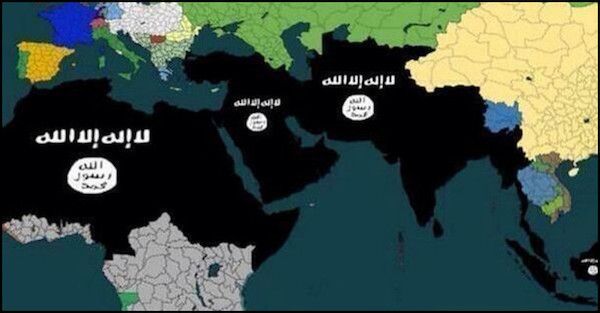 When looking at this map it is important to understand that ISIS is thriving in a near vacuum created by conflict in Syria and a completely dysfunctional Iraqi government and military. They have not been at the top of a superpower’s target list. And now, after this onslaught, the group has risen to the top of several kill lists. They are creating enemies on a massive scale. So that five year expansion plan is equal parts wildly optimistic recruit bait, psychological warfare and outright trolling. What the group really needs is a five year survival plan. Life for them is about to get much more challenging.

Technology is a Double-Edged Sword

It is quite easy to understand how a broad social media campaign helps ISIS. But their success in this area will create some problems for the group over the long haul. Their members and supporters are feeding scores of intelligence analysts across the globe. Members and supporters are being cataloged, mapped and tracked back to their real identities on a massive scale. Those hashtag campaigns that encourage supporters around the globe to check-in are also an intelligence goldmine. Some of them will use privacy tools to evade detection but mistakes will be made and when they are several services will be waiting.

Another early success for the group, the use of an Android app to boost their social media presence, will also come back to haunt them. Not only will it be a source of valuable intelligence but it illustrates a point of vulnerability for eJihadists who might be surprised to find that their next favorite app was actually created by an opposing intelligence agency or freelancer. Loose digital networks are shockingly easy to infiltrate and misdirect. This one is going to be targeted on a massive scale.

Obviously, this is a reminder that the internet will remain a persistent battlefield for governments and extremists. But it should also serve as a reminder that quick and easy propaganda victories by small forces do not translate into won wars. And governments, in case you haven’t been watching the news for the past year, know how to wage a digital war. More importantly, they know how to take an online battle into the real world on a scale that ISIS does not yet fully appreciate. They can troll the U.S. government all day with Michelle Obama Photoshops but the memes and hashtags that seem so amusing in the early stages of this conflict may be viewed with regret once ISIS realizes the response they’ve triggered.