J. Robert DuBois has generously offered the first chapter of book Powerful Peace: A Navy SEAL’s Lessons on Peace from a Lifetime at War to Blogs of War readers at my request. I think it’s an important read. In it, Rob lays out a highly credible and sensible plan for developing personal awareness and finding balance in our quest for security. I hope you will take time to read it.

We are also currently working on an interview which you will hopefully see here in the next couple of weeks. In the meantime you can follow him on Twitter @RobDuBois and at PowerfulPeace.net.

The history of violent conflict traces back in many oral traditions to the very first humans. This opening chapter offers a first-hand account of one of the most hate-based and hate-producing events of modern history. Close the book for a moment, and take a second look at the cover. The number in the bottom-right corner of my photo is the original date stamp of that shot, taken while training Arab SEALs at their base in the Middle East. It was exactly seven days before September 11, 2001. And it was exactly seven days after my wife and children flew out of Boston on a flight number that two weeks later would be incinerated and immortalized in fire and blood. Yes, friends…I am familiar with hate.

In hatred as in love, we grow like the thing we brood upon. What we loathe, we graft into our very soul. – Mary Renault

My American SEAL platoon and our Arab SEAL hosts watched in living color on satellite television as the second plane dissolved into the second of the Twin Towers. It was approaching evening where we were, several months into a deployment to the Persian Gulf. We sat frozen, burning in silent rage, staring as nearly twenty deluded murderers exploited the most advanced technology to carry out the most primitive evil. Having slashed women to death with razor knives, these “men” committed suicide, proving they were brave enough and strong enough to kill thousands of innocents—among them unsuspecting office workers, little old ladies, and infants.

These murderers called themselves “warriors.”

We were all naval commandos in that room, some American, others the “local nationals” we had been sent to train. Ironically painful and poignant, we had been teaching our hosts skills that would make them better at killing terrorists. Yet not one of us could lift a finger to prevent what was happening in the United States. 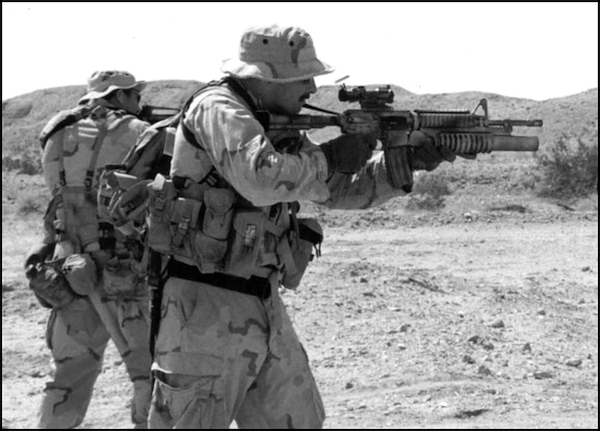 As we sat together in that remote Middle Eastern barracks, each was very much alone with his thoughts. The Americans thought of loved ones and Teammates a world away. My Arab friends thought of…well, I hope to one day share another cup of tea and ask them. (As you may imagine, things got a little busy during the days that followed. Within weeks, I would be conducting reconnaissance for the invasion of Afghanistan.)

There we all were. Nearly twenty Arabs and Americans, living together in those barracks; nearly twenty Arabs, dying together in dispersed teams of terrorist hijackers. Had those cowardly bastards chosen to face our little international group, man to man, 9/11 would have turned out differently. They wouldn’t have had to work so hard to make their way to hell, for one thing. At our hands, hell would have come up roaring to greet them.

And three thousand gentle, innocent souls would still be alive with their families.

Not one word was spoken for hours during the spectacle. If one of the local SEALs had laughed or expressed any satisfaction in what we were witnessing, I believe I would have killed him on the spot. This is not a boast. It’s a confession, a shameful admission. I’m very ashamed it’s true. These were my friends, but we were so choked with hurt; we were so thirsty for revenge.

Here was a bitterly painful sense of helplessness, for some of the most dangerous men on earth. We were supposed to be the protectors of our countrymen. Each December Seventh at the SEAL Delivery Vehicle (SDV) Team in Hawaii, in fact, we swam the five miles around Pearl Harbor’s Ford Island. Commemorating the original Day of Infamy in 1941, this ceremony sent the message that hostile actors were welcome to attack again if they wished…we would be ready this time.

Instead, in September sixty years later, we were on the wrong side of the planet.

We were supposed to be the ones who would sacrifice all so fellow citizens could sleep safe in their beds at night. Yet we would sleep through that night with troubled dreams, safe in our own beds, while thousands of innocents under our protection suffered and died in a crushing, inescapable nightmare.

In addition, within our platoon I had the unique awareness that only two Tuesdays earlier, my wife and children had flown from Boston to California, just as a plane I had watched disintegrate had been scheduled to do. Later, my wife would tell me a strange detail. During the early part of their flight on August 28th, a man of apparent Middle Eastern descent had been roaming the cabin and studying the passenger seating, crew stations, wings and more. He had been carrying an Arabic language newspaper. She wrote it off as unreasonable suspicion on her part, but remained troubled by his intense focus on surveying the airplane…especially the wings. Of course, this may have all been coincidence.

It is no coincidence, however, that I have a personal understanding of hatred. That’s the first thing I want you to understand.

Unlike my loved ones sobbing through a tortured morning rush hour in the United States, I sat among Arab friends and allies in the Middle East and watched 9/11 unfold. Some in my mixed group of highly trained commandos may have empathized with the grievances of the al Qaeda (AQ) terrorists piloting those improvised cruise missiles.

If that last statement strains your comfort level, I’m satisfied. Peacemaking is not the fluffy stuff of rainbows and unicorns. It is not exclusive to well-intentioned activists shouting “Ban War!” Peacemaking is the right—and the burden—of all of us, and it sometimes includes the use of force. Without just war, Hitler’s quest would have destroyed millions more. Genuine conflict reduction requires the capacity and willingness to strike, combined with a determined restraint and the guts to stare straight into the face of hate…and then choose a reasoned response.

Yes, some of my friends did (and do) empathize with the grievances AQ uses to justify hijacking airplanes. Note the careful use of this phrase “empathize with the grievances.” I know none of our Arab partners in that host platoon were radicalized terrorists. If one had been, he would have exploited our trust and killed us while we slept. The symbolic value of slaughtering a few American SEALs would have been irresistible. As demonstrated by the 9/11 hijackers, even sacrificing his own life to accomplish this would have been acceptable to an extremist with an opportunity.

Here’s one poorly hidden elephant in the room: Unresolved grievances and the anxieties they compel keep solutions at arm’s length. In many of the countries I’ve visited around the Middle East, the horror of Palestinian children killed in Israeli attacks is advertised widely and discussed passionately. For Israelis, on the other hand, the constant threat of devastating Palestinian rocket and suicide bomber attacks is a deep and chronic pain that can make reasoned negotiation seem unreasonable. Neither side will ever run out of iron-clad reasons to avenge the pain it has suffered; nor will either side ever accept its own marginalization or elimination, so all the struggle and rhetoric in pursuit of dominance for either extreme can only serve to prolong the suffering of innocents within both populations.

Many participants can sense this. Isn’t it time many more admitted it? Isn’t it time both parties, with their thoughts on their children, stared straight into the face of hate and said “Enough?”

As mentioned earlier, actor/director Don Cheadle and humanitarian John Prendergast have done exactly that in another abscess of raging human conflict in another part of the world. You’ll read about their “Enough Project” and book, The Enough Moment, in chapter 25 on Commonality.

Only the absolute cessation of violence allows space to work through underlying issues and pursue stability and reconciliation to benefit both parties. Yet all too often, hatred is so intense that a participant will choose personal suffering over personal peace as the price required to cause his adversary pain.

Until squabbling siblings, barroom brawlers or aggressing armies establish at least a cold truce, until the participants can “cause a pause,” the cycle of retaliatory violence continues to escalate and solutions fly ever further from reality…and more innocents suffer for our folly. At the most basic level there is no such thing as a corporation, an army, a nation, or even the book club where you may be reading this—each of these entities is nothing more than a collection of individual human beings in willing cooperation, backed up in some cases by lists which are also nothing more than shared understandings between individuals.

The human is the lowest common denominator, from the smallest to the greatest social organization we have ever established. This universal individuality, to be revisited later on in the sections on Heart and Soul, is the reason peace cannot spread except by individual choices and actions…like yours. Understanding and peace don’t come about by some mysterious accident while we squabble over crumbs. Boardroom, bedroom and battlefield are universally populated only by individual human beings, and only those who consciously choose and act can improve conditions for all of us.

The solution lies not at but between the extremes. Only here can balance—and peace for those under your care—be found.