Dr. Clint Arizmendi is a Research & Analysis Officer at the Land Warfare Studies Centre. The views expressed are his own and do not reflect those of the Australian Department of Defence or the Australian Government.

As the IDF and Hamas conflict unfolded, observers witnessed more than the world’s first ‘Twitter war’, they witnessed the widening of the conflict to include the participation of unsanctioned non-state cyber actors (UNCAs), who not only aided, but also interfered with – and obstructed – Israeli and Hamas operations in the name of hactivism. Are such hacktivists performing a public service, committing a crime, or have they crossed a cyber line into terrorism?

Aside from the traditional method of using kinetic force to shape the battlespace by way of precision strikes, the IDF also used a variety of social media platforms to simultaneously deter Hamas and reassure the global audience that terrorists were the only target. Techniques used range from live video of the killing of a high-ranking Hamas official to realtime tweeting of events as they unfolded. Likewise, Hamas disseminated video of a downed Israeli drone and evidence of their Iranian-made long-range rockets reaching Tel Aviv, thus highlighting the importance and significance of establishing – and sustaining – a ‘positive’ social presence.

The use of social media as a key element of information operations (IO) is not new – the US run Sabahi website in the Horn of Africa and the now controversial attempt by the US embassy in Cairo to de-escalate tension via Twitter during the attack in Libya serve as prime examples. For the IDF, presumably, the use of social media was a calculated strategy to prevent a repeat of the negative global press after their 2006 campaign.

As the conflict in Gaza shifted back-and-forth from the conventional and information realm to the cyber realm, the opportunity for UNCAs to influence the digital battlespace increased significantly, making it a particularly risky venture for both Israelis and Hamas. Here, UNCAs had a realtime effect on conflict, notably with regard to hacktivists such as The J35st3r and Anonymous – the former supporting Israel by disrupting Hamas websites and the latter supporting the Palestinians, having declared cyber-war on Israel.

While Israeli officials claim that only one of the 44 million cyber attacks on its government websites was successful during Operation Pillar of Defense against Hamas, Anonymous claimed more than 600 successful cyber attacks against both public and private Israeli websites. As an unintended consequence of its attempt to use social media to shape the battlespace, Israel’s campaign against terrorism became more complex; they were simultaneously fighting a physical and IO war against Hamas and a cyber war against Anonymous.

If Anonymous members who engaged in the ‘war’ against Israel reside in one of the countries listed above, then there is domestic terrorism legislation that can be brought to bear to regulate such behaviour. If however, they reside in a country such as Turkey, Norway or Russia, none of whom classify Hamas a terrorist organisation, then – at best – they are engaging in cyber crime.

The status of hacktivists engaging in such attacks can be considered analogous to the legal confusion surrounding the ‘combatant’ status of many Guantanamo Bay detainees. Are the Anonymous collective hacktivists, cyber combatants or criminals? Arguably, it depends from where they conduct their activities (assuming, of course, that this information can be determined).

Further complicating the matter is the potential for these ostensibly unsanctioned non-state cyber actors to be sponsored by the party that benefits from their activities. It is by no means beyond the realms of possibility for elements operating within the Anonymous collective to have received financial or technical support from Hamas or its supporters. Likewise, is it too much of a stretch that The J35st3r might be this century’s answer to the state-sponsored, deniable ‘black’ operatives of the Cold War?

Anonymous has formally recognised the Gaza ceasefire and declared mission success in Operation Israel, while Hamas has declared a national holiday of victory. Whether there is a way to actually measure the affect that Anonymous and The J35st3r had upon the conflict remains to be seen; however, one thing is for certain: the use of social media and the cyber realm for war represents the risk of direct external influence – if not obstruction – from UNCAs as they blur the lines between hactivism and terrorism.

@th3j35t3r, who describes himself as a “Hacktivist for good. Obstructing the lines of communication for terrorists, sympathizers, fixers, facilitators, oppressive regimes and other general bad guys” contacted Blogs of War on Twitter after this post was published. I am posting screenshots of his private feedback with his permission: 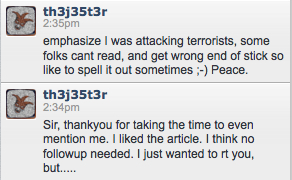